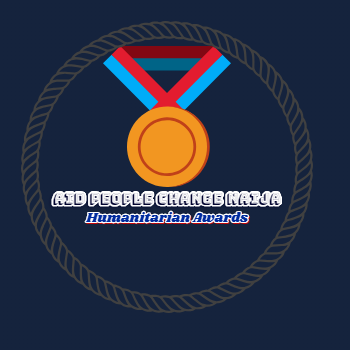 Our mission is to promote humanitarian issues and inspire others. Winning person profile will become our showcase based on their positive impact on vulnerable people , countries affected with natural disaster.

We strive to give recognition to people, who work and dedicate his/her life for the betterment of humanity by eradicating global poverty and fighting  social ills worldwide. He/she could be anyone from any kind of profession, from all age, and from any parts of the world. May it be an ordinary man/female , Entertainer, Public figures or a nation leader. We value hard works laboured for peace and humanity, reaching hunger souls crying for help

The first award ceremony was held in 11/12/ 2008, at  (Samuel Ogbemudia stadium)  at Oredo local Government, Benin City (Edo state) , with  the media  partner NTA and Edo bradcasting service who transmitted on air. The award was sponsored by Guiness Nigeria Plc and presented by Ambasasdor, Mrs Becky Edionewe (former  secretary of  Benin City zone to Nigeria Red Cross) and Nigeria music legend Professor sir Victor Uwaifo. Majek Fashek was first to be awarded and the second to receive the award was Angélique Kidjo same year.

In 2019 , APCN Awards 11th edition ceremony was hosted by the lord Mayor of South Dublin Cllr Trevor Gilligan PC . The event was held at Belgard Heights Youth & Community Centre with some top Irish and Nigerian  Ambassador  to Ireland and other high profiled personalities in attendance.  APCN Humanitarian Awards was rated as one of the Nigeria and Ireland  largest humanitarian award by South Dublin lord mayor and the Nigeria Vanguard Newspaper.

In November 2020 edition, which was hosted  online by Nigerian music legend ,Evi Edna Ogholi (Ambassador of Hope and Peace) of the  APCN  Charity organisation. Due to Convid 19, awardees received their plaques through post offices while few honorees  received their awards directly from the APCN AWARD centre in Benin City.

Recipients for the APCN Humanitarian awards are nominated by volunteers of the Aid People Change Nigeria Charity and Orphanage Organisation , worldwide.

From December 20th 2020, the award categories will be divided into two categories.

Award for Exemplary : The award will be used to honor  political leadership, Companies, Countries, Communities and Organisations and websites.

Award for Excellence :This category will be used to honour  Actress, Actors, Musicians, media personalities, entertainers and social media influencers.